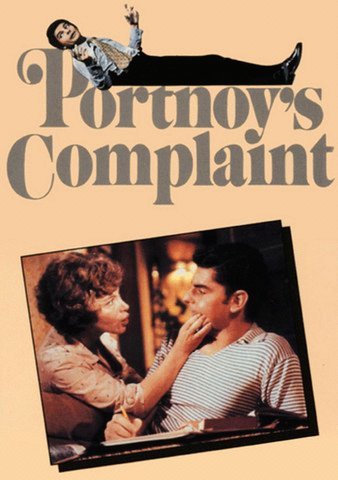 "Portnoy's Complaint: A disorder in which strongly felt ethical and altruistic impulses are perpetually warring with extreme sexual longings, often of a perverse nature..."
Advertisement:

Portnoy's Complaint (1969) is an American novel by Philip Roth. The novel tells the humorous monologue of Alex Portnoy, a sex-obsessed Jewish youth who confesses his often bizarre sexual encounters to his psychotherapist. As he grows older, he becomes a close adviser to the Mayor of New York City and struggles to square his desire to help society with his outsized sexual appetites, a conflict which eventually reaches a breaking point. Though it was originally banned in several countries due to its explicit content, it is now often ranked among the greatest novels of the 20th century, and is one of Roth's most popular books, along with American Pastoral.

It was adapted into a film in 1972, written and directed by Ernest Lehman and starring Richard Benjamin and Karen Black.