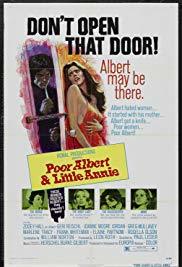 May she rest... in pieces.
Advertisement:

Albert is a young man who absolutely despises female sexuality. He tried to kill his mother in the past, and was institutionalized. Now he's escaped, and is after her again. As Albert kills anybody who stands in his way, he forms a bond with a young girl named Annie, viewing her as the only innocent woman he's ever seen. Meanwhile, an exasperated detective and Albert's psychiatrist both work to find the madman before it's too late.