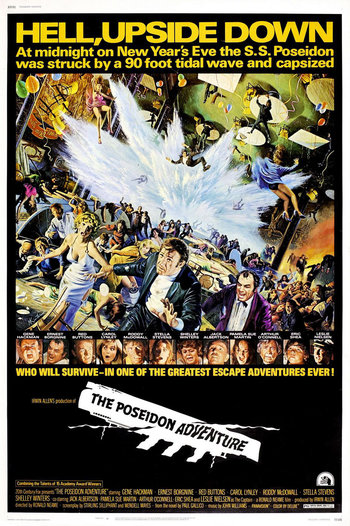 From heaven to llǝɥ in an instant.
Linda Rogo: So that's the cat this ship is named after, huh?
Captain Harrison: That's right, Mrs. Rogo. The Greek god Poseidon. God of storms, tempests, earthquakes and other miscellaneous natural disasters. Quite an ill-tempered fellow.
Advertisement:

The Poseidon Adventure is a 1972 film adaptation of a 1969 novel by Paul Gallico, produced by Irwin Allen, directed by Ronald Neame, and featuring an All-Star Cast that includes Gene Hackman, Ernest Borgnine, Red Buttons, Roddy McDowall, Shelley Winters, Jack Albertson, Leslie Nielsen, and the Queen Mary. It's one of the key entries in the '70s Disaster Movie genre.

The passengers and crew of the aging ocean liner SS Poseidon party without a care in the world as the ship — making her final voyage en route to the scrapyard — sails on across the Mediterranean. Already behind schedule, the representative of the Poseidon's new ownership consortium overrides the objections of her captain and refuses to allow her to slow down and take on ballast to more safely ride out some heavy weather. On New Year's Eve, an undersea earthquake strikes near Crete, creating a massive rogue wave; when it hits the Poseidon, she capsizes. In the aftermath, one lone preacher, Reverend Frank Scott, must lead a group of survivors from the ship's ballroom up to her hull to be rescued before she sinks. But will they make it?

Followed by the 1979 sequel Beyond the Poseidon Adventure, in which rival salvage crews board the ship, get trapped, and encounter more survivors of the original disaster. Directed by Allen and starring Michael Caine, Sally Field, Telly Savalas, Peter Boyle, Jack Warden, Shirley Knight, and Karl Malden, it was a critical and commercial flop.

Meanwhile, the original story was remade twice within the course of six months around 2005–06, first as a Made-for-TV Movie on NBC and then as the feature film Poseidon; the latter production featured the Queen Mary II.

The 1972 film features examples of:

The 1979 sequel Beyond the Poseidon Adventure provides examples of:

The 2005 TV movie of the same name features examples of:

Paul Gallico's 1969 novel, on which the above films are based, provides examples of:

Alternative Title(s): Beyond The Poseidon Adventure