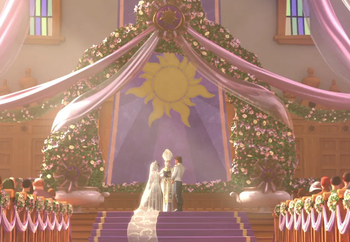 Praise the sun!
In works of fiction, this trope is the habit of not mentioning or showing the specific denomination (or even religion) of a temple, church, or place of worship where the denomination would be expected to play a role. This can take the form of using a generic/made up denomination name in place of a real one, not identifying the church, or combining traits of different denominations to confuse the issue.
Advertisement:

This trope is usually used to introduce religion while avoiding it entering too deeply or divisively into a show, a sort of Law of Conservation of Detail used to keep from distracting the audience. Similar to Jesus Taboo, this trope is sometimes purposely used to avoid accusations of favoring/disfavoring a religion, especially when used to avoid marketing mishaps in children's media. Usually in the case of Christian churches, they just have a steeple, pews, a dais and generic stained glass windows without direct symbolic links (such as crosses or angels) that could be identified or interpreted as a specific denomination.

Interestingly, this trope is very much Truth in Television. Much as Secular Hero and Jesus Taboo are common in communities that have diverse religious practices, it's common to see non-denominational "places of worship" in funeral homes, wedding chapels, hospitals, prisons, and airports in these communities. And there are some denominations that combine elements of the theology and practices of preexisting ones (e.g. Anglicanism, being somewhere between Catholicism and Protestantism), to say nothing of ones that syncretize Christianity with other religions (aka Interfaith Smoothie).

To avoid People Sit on Chairs, cases where the denomination of a church wouldn't be expected to play much of a part in the plot shouldn't be included as examples. For example, a lot of films have newlyweds driving away from an unidentified church — here, the church is used mainly as a signifier that this couple is just married, and its denomination isn't at all important to the plot.