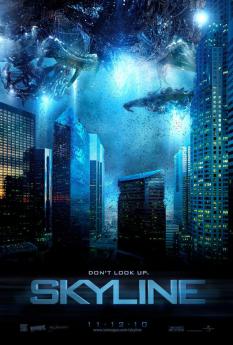 Skyline is a 2010 science fiction disaster film directed by the Brothers Strause.

A young couple, Jarrod (Eric Balfour) and Elaine (Scottie Thompson), travel to LA for their friend Terry's (Donald Faison) birthday party at his penthouse apartment. After the wild party, everyone goes to sleep it off... only to be awoken by mysterious blue lights that fall from the sky into the city. As people are drawn to the lights in a twisted trance, they are snatched by the light, never to be seen again.

As the survivors draw the blinds to protect themselves from the light, they're faced with a dilemma: do they brave the hypnotic blue lights outside to try and escape, or do they hide in the darkness and hope that help comes for them? Things get worse when the aliens start sending out scouts to search every apartment with their blue lights, and especially when they learn what the aliens do to the people they take...

A sequel, Beyond Skyline, was released in 2017, starring Frank Grillo and Iko Uwais. It was followed by Skylin3s in 2020.

At least one key plot element — why the aliens are here — could be considered a reveal, but it's also intrinsic to the discussion of the work. Per Handling Spoilers, blocking out 1/3rd of the examples doesn't work. So if you haven't seen the film and want to keep the alien's modus operandi a surprise, stop reading here.