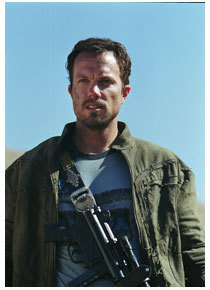 Adam Baldwin (born February 27, 1962) is an American actor who's made a name for himself playing military, law enforcement, and general badass types in TV and movies, fitting him as he is a fairly large, strong guy (standing about 6'4).

Baldwin grew up in Chicago (technically Winnetka, IL) and graduated from New Trier Township High School East, a school that produced many other well-known actors and actresses, including Charlton Heston, Rock Hudson, and Rainn Wilson, as well as half of Fall Out Boy. He made his first film appearance not long after graduation, in 1980's My Bodyguard.

From that point, Baldwin found steady work in both film and television, most notably as Sgt. "Animal Mother" in the film Full Metal Jacket. He also played roles in The X-Files, Stargate SG-1, Wyatt Earp, and Independence Day. What really put him into the focus of this site was his turn as the Anti-Hero criminal Jayne Cobb in the cult sci-fi series Firefly. Since then, he's also known for his role as premiere badass John Casey in Chuck. Baldwin also works as a voice actor, and voiced Hal Jordan, the Silver Age Green Lantern on Justice League, along with fellow Firefly stars Nathan Fillion, Gina Torres, and Morena Baccarin (they never appeared in the same episode, though.)

No relation to Alec Baldwin.