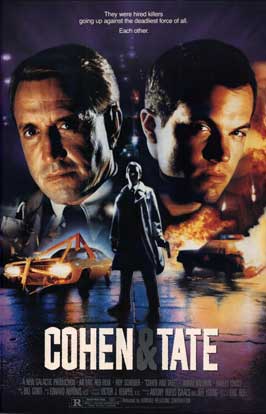 They were hired killers going up against the deadliest force of all...Each other.
Advertisement:

Cohen and Tate is a suspenseful high tension 1989 thriller starring Roy Scheider and Adam Baldwin about a boy that's been kidnapped by two mismatched hitmen.

The boy tries to put them at each other's throats while being driven to their employers, possibly to be killed. Cohen, an older no-nonsense, straight-laced, professional becomes increasingly irritated with his partner Tate, a young, brutish, hot-tempered, psychopathic killer. When their prisoner uses unnatural guile and resourcefulness to play them off against each other the movie becomes filled with edgy, suffocating tension. Written and directed by Eric Red, who also brought us Near Dark and The Hitcher.