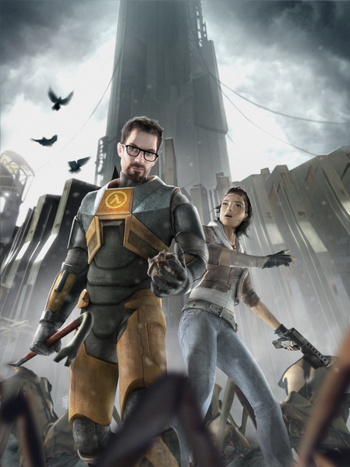 "Prepare for unforeseen consequences."
"The Right Man in the Wrong Place can make all the difference... in the world. So, wake up, Mister Freeman. Wake up and... smell the ashes."
— The G-Man
Advertisement:

In 2004, Valve released the sequel to their revolutionary and critically acclaimed first game Half-Life, Half-Life 2, which itself broke new ground on many fronts in its graphics engine, physics system, artificial intelligence, and its online distribution/updating system. Every retail copy of the game also came with Counter-Strike: Source to help fill out the multiplayer side of things.

Half-Life 2 starts off about twenty years after the ending of the original game, as the mysterious G-Man uses his time- and space-bending powers to place Gordon Freeman on a train headed for City 17, some undisclosed place in Eastern Europe. Gordon soon finds out that Earth has been invaded and conquered by a powerful alien force known as the Combine, which apparently detected the Black Mesa incident and took advantage of it to enslave humanity and add Earth to its collection of assimilated worlds. Having attained an almost messianic status among the fledgling resistance forces thanks to his actions in Black Mesa, Gordon attempts to survive and eventually strike back against the Combine by provoking a full-scale revolution. In this, he is aided by the Vortigaunts, an alien race whose enslavement he broke by his destruction of the Nihilanth; members of the Resistance, including several former Black Mesa scientists; and Action Girl Alyx Vance, who accompanies Freeman throughout much of the game as a fully-qualified AI partner. He is opposed by the vile Dr. Breen, former administrator of Black Mesa and now self-styled overlord of humanity.

Small side games released around the time of the original include the multiplayer game Half-Life 2: Deathmatch and the single bonus chapter Half-Life 2: Lost Coast.

The game has to date been followed by two sequels, called "Episodes". In lieu of a full-out Half-Life 3, these shorter games were intended to cut down on the development time that a full sequel would require, but it hasn't worked out that way.

Episodes One and Two chronicle Alyx and Gordon's escape from City 17 immediately after the events of the main game, and the rebels' continuous struggle against the remaining Combine forces, who are seemingly controlled by the mysterious "Advisors". The games also further develop the relationship between the two protagonists. Episode One was released in 2006, and Episode Two was released in 2007 alongside Portal and Team Fortress 2 in The Orange Box. However Episode Three (also sometimes refered to as Half-Life 3), intended to complete the Story Arc and resolve the cliffhanger that ends Episode Two was not released, and whether it was being worked on or not was for a long time the subject of a great deal of debate to the point of it becoming the next Duke Nukem Forever.

Half-Life 2 and its sequels are remembered for setting new standards for A.I. NPC companion characters (Alyx in this case), later reflected in games such as BioShock Infinite. It was also one of the first games to make heavy use of on-the-fly physics in an intuitive and successful manner - other first-person games had experimented with physics objects prior to HL2, but it was HL2 that incorporated these elements in a way that was easy for the player to utilize and which influenced how every game that followed did physics. Finally, Steam was originally built as an update client for HL2 and other Valve products... meaning HL2 is the genesis of one of the largest digital distribution networks in media history. Half-Life 2 is a very important game in a number of regards, and even with its inconclusive ending, those interested in the history of video games should definitely make sure they're familiar with it.

In 2006, a Japan-exclusive arcade port called Half-Life 2: Survivor was released. It features an unusual control mechanic with combination of pedals for jumping and crouching, joystick to move, and mouse to aim and fire. It also condenses the base Half-Life 2 campaign, cutting all of the non-combat sections while adding several new mission mode and an all new class-based multiplayer mode with all-new characters including ones based from cut concepts.

In August 2017, lead writer Marc Laidlaw (who had left Valve in 2016) released the plot summary

of the unreleased Half-Life 2: Episode 3, framed as a letter from Gordon Freeman note all proper nouns in the original blog post (titled Epistle 3)

were changed in in some way or another. This all but confirming that the franchise had come to rest.

Then, on November 21, 2019, over 12 years after the release of Half-Life 2: Episode 2, a follow-up was finally announced... But not necessarily the ones that fans had expected. The next installment of the series was revealed to be a title for SteamVR called Half-Life: Alyx, a game that would allow players to experience a story set before the events of Half-Life 2, controlling Alyx Vance for the first time. It involves Alyx and her father taking the fight to the Combine, in an Interquel, set between Half-Life and Half-Life 2... And somewhere along the way, the G-Man factors into the story.

Half-Life 2 and its episodes contain examples of:

open/close all folders
# to G
H to Q
R to Z
"Rather than offer you the illusion of free choice, I will take the liberty of choosing for you... if and when your time comes round again. I do apologize for what must seem to you an arbitrary imposition, Dr. Freeman. I trust it will all make sense to you in the course of... well... I'm really not at liberty to say. In the meantime... this is where I get off."
Feedback