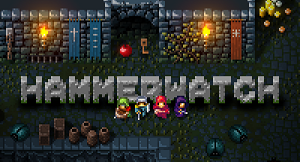 Hammerwatch is an Action-Adventure/Hack and Slash, released on Steam on August 12, 2013.
Advertisement:

The plot is fairly light. A group of adventurers (initially a Wizard, a Ranger, a Warlock, a Paladin; a Thief and a Priest were added via updates) have just finished exploring the titular ruined Castle Hammerwatch and are about to exit, when the bridge suddenly collapses, cutting off one (or more) of the party from the others. The stranded adventurer(s) must now fight their way through the monster and trap filled castle in order to find another escape route and rejoin their comrades. Along the way, they will fight hordes of giant beetles and poisonous worms, legions of skeletons, and, of course, Dragons.

In the September 2014 update, a brand new campaign was added, titled Temple of the Sun. It's more plot-heavy than the original campaign, with the titular group of adventurers journeying to a desert village of Sunspot, where the frost sorcerer Krilith sneaked to the Sun Altar and summoned the evil Sun Guardian Sha'Rand. While the villagers of Sunspot have sealed Sha'Rand in the Sun Altar, a weakened Krilith retreated into the deep caves to recover his strength. The party must delve into the ruins and slay both Krilith and Sha'Rand before the sorcerer can regain enough magic to free themselves.

A sequel/spinoff, Heroes of Hammerwatch, was released on March 1, 2018, and is basically the original game but with roguelite mechanics.