All spoilers for Halo: Combat Evolved will be left unmarked. You Have Been Warned! 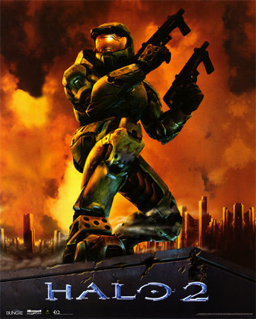 Only the strongest will survive.
"He was indeed my enemy, but in time I named him ally, even friend. The events that forged this bond were... complicated."
— Thel 'Vadamee, Halo 2: Anniversary prologue
Advertisement:

Halo 2 is the second game in the Halo series, developed by Bungie and published by Microsoft for the original Xbox on November 9, 2004.

Following the events of the first game, the Master Chief arrives back at Earth, praised as a hero for his actions on Installation 04. In the midst of celebration, however, a Covenant attack begins on Earth, with the Chief and the UNSC racing to stop them. The Spartan soon learns that the Covenant are looking for something on Earth, and his quest takes him to a new Halo ring, where he uncovers more of the mystery behind the Flood.

Meanwhile, the game also follows a Covenant Elite named Thel 'Vadamee, better known as the Arbiter. Originally the leader of the Covenant forces that fought the Master Chief on the first Halo ring, he's branded as a heretic by the Covenant leaders due to his failure to stop the ring's destruction. Given the role of Arbiter by the Prophets, Thel is tasked with suicide mission that may potentially help him reclaim some of his lost honor. But as he learns more about the origin of the Halo rings and the fate of the Forerunners himself, he begins to doubt the Covenant cause.

Halo 2 introduced Guns Akimbo to the series; any gun that can be fired with one hand can be paired off with another one-handed gun of any type (besides the Master Chief, Covenant Elites can pull this off too). It also introduced vehicle hijacking - assuming you could get close enough to the vehicle without being gunned down or run over. Halo 2 solidified the presence of online console gaming thanks to the original Xbox Live service; thanks to Halo 2's success, practically any game of nearly any genre will have at least some debate from the developers on whether or not it should feature an online component.

To mark its ten year anniversary, Halo 2: Anniversary was released by 343 Industries on November 11, 2014, as part of the compilation Halo: The Master Chief Collection. It comes with updated graphics, six remastered multiplayer maps with their own unique engine, and other bonus content, but unlike the original release of Halo: Combat Evolved Anniversary, it also comes with the original multiplayer.note The Master Chief Collection's version of Combat Evolved Anniversary also has its original multiplayer component, playable online over Xbox LIVE for the first time. The game has also been ported to PC, in both its original and Anniversary forms. The original port came in 2007, as part of Microsoft's attempt to increase support for PC gaming and the then-new Windows Vista operating system through the oft-maligned Games for Windows Live service; it would end up the last Halo game in general to come to PC until 2013's Halo: Spartan Assault, and the last main Halo title to get a PC port until The Master Chief Collection came to PC in late 2019 with a port of Halo: Reach. Halo 2 Anniversary would later launch for the PC version of the collection in May 2020.