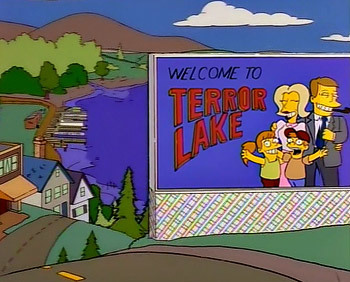 The terror comes from the rent prices.
"I take a look at the maps, and sure enough, this outpost is stuck out in the middle of nowhere, smack in the Smooth Points of Pride. 'Boatmurdered' they call it, a name which doesn't bode well for much of fucking anything."
— StarkRavingMad, Boatmurdered
Advertisement:

Some cities have cute names. Some weird names. And some have no name at all.

And then there are these places. They have names like "Doomville", "New Evilsberg", "Murder Plains", "Hell's Bathroom", "New Jersey". It doesn't matter if it's one of the nicest towns you've ever seen, if it's named Death City (or alternatively Necropolis), it's one of these places.

Note: if the place has a bad reputation, but the name itself is not scary (like Camp Crystal Lake or Sunnydale), it does not count. These are places that tell you right up front: this is not a nice place.

A common comedic subversion is to reveal that the place actually takes its name from something innocuous: for instance, a place named Death Canyon actually being named for its discoverer, Merriweather Death. Bonus points if it then reveals the place is actually incredibly dangerous anyway.

Related to Doomy Dooms of Doom. The location counterpart to Names to Run Away from Really Fast. The inverted version of this trope would be Super-Fun Happy Thing of Doom, except in that trope, the thing must be actually bad.