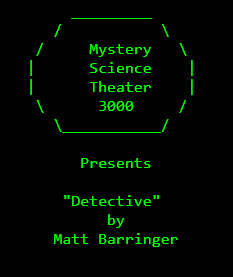 This page concerns two Interactive Fiction games, one of which includes the entirety of the other but plays off of it in a wholly different manner. It's a bit complicated.

To begin with, Detective was an early text adventure game written and released by one Matt Barringer. The player, the titular detective, is told that the mayor has been murdered and entrusted with the job of finding out who did it. The author was just 12 years old at the time, and it showed – the game quickly became infamous for its poor writing, confusing navigation, unfair and un-telegraphed deaths, and other basic logical inconsistencies. A review in issue 5

of SPAG (a long-running Interactive Fiction e-zine) noted that it was So Bad, It's Good enough that it could easily be used as fodder for the cast of Mystery Science Theater 3000…

...which gave one of his fellow IF authors an idea.

Christopher E. Forman found himself with some free time after finishing co-writing The Path to Fortune, and (after gaining approval from the review author to flesh out his idea) decided to enter the 1995 IF competition with a conversion of the game featuring added riffs by the Satellite of Love crew, with the story taking place sometime between when Mike replaced Joel in Season 5 and when Frank left in Season 6. In four days, he created Mystery Science Theater 3000 Presents "Detective", which packages the game like an episode of the series (complete with introduction, conclusion, and stinger) and lovingly mocks several of the game's shortcomings.

One year after its release, the author uploaded the Silver Screen Edition, which slightly alters some parts of the game (largely aesthetic changes) and adds several essays regarding its creation, Detective, and Mystery Science Theater. It also includes a postmortem for an abortive sequel (riffing on The Caverns of Chaos) and an interview with Matt himself, who regarded his game as an Old Shame and was not bothered by Foreman mocking it.

You can play the game for yourself online here

. The source code can be found here