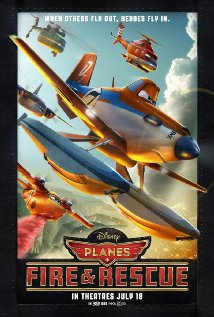 When world famous air racer Dusty Crophopper (voice of Dane Cook) learns that his engine is damaged and he may never race again, he must shift gears and is launched into the world of wildfire air attack. Dusty joins forces with veteran fire and rescue helicopter Blade Ranger (voice of Ed Harris) and his courageous air attack team.

A sequel to Disneytoon Studios' Planes, a Spin-Off of Pixar's Cars franchise.