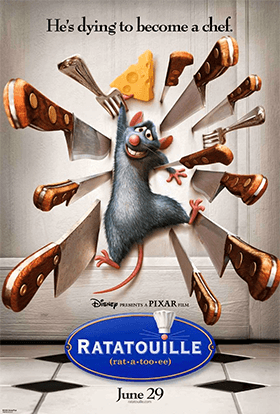 The eighth computer animated film by Pixar, Ratatouille (2007) is about a rat named Rémy who has a highly developed sense of taste and smell. Dissatisfied with eating garbage like the rest of his family, he wants to become a chef. When he winds up in Paris, he gets his chance to cook at the restaurant founded by his idol, Auguste Gusteau, by making a deal with the restaurant's garbage boy, Linguini, who (thanks to Rémy's interference) has been mistaken for a cooking genius. Rémy guides Linguini in the kitchen in a puppet-like manner so that Linguini doesn't lose his job, while Rémy gets the cooking experience (and critical fame) he desires.

Played in theaters with Pixar short Lifted. The movie has a follow-up short titled Your Friend the Rat released the same year. If you're interested in the tie-in game, go to this page. The Ratatouille characters also have a series of levels in the Kinect Rush: a Disney-Pixar Adventure, and Rémy appears in Kingdom Hearts III as a supporting character who puppets Sora into preparing his delicious recipes the same way he does it to Linguini in the movie. There also exists a ride at the Disney Theme Parks based on this movie, opening at Walt Disney Studios Park in Paris in 2014 and at Epcot in Florida in 2021.

Ratatouille is a garlicky stew of mostly squash, eggplant, red bell pepper, and tomatoes, and whatever else the cook might have on hand that day and want to use up. While the film implies that it's a lowly provincial peasant dish, the version served to Anton Ego is a haute cuisine variation called "confit byaldi

" that takes about four hours to prepare.

In "Ratatouille, Linguini has returned to the restaurant after shocking everyone with his success in making soup. Unimpressed, Chef Skinner tells him "Welcome to hell. Now recreate the soup."

Example of:
Welcome to Hell

In "Ratatouille, Linguini has returned to the restaurant after shocking everyone with his success in making soup. Unimpressed, Chef Skinner tells him "Welcome to hell. Now recreate the soup."