Western Animation / Your Friend the Rat 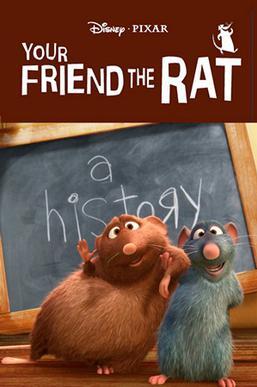 Remy: Hello, I'm Remy, and this is my brother, Emile.
Emile: Hi.
Remy: We're here to speak out on behalf of oppressed rats everywhere.
Advertisement:

Released as a bonus feature of the Blu-Ray/DVD release of Ratatouille,Your Friend the Rat is a quasi-educational entry of the Pixar Shorts hosted by Remy and Emile. In it, they discuss the history of rats co-existing with human society and try their best to persuade the audience as to why rats should have a better reputation among humans.

This short features Pixar's first foray into 2D animation, being the style used for the majority of the short, as well as their first use of Stop Motion animation during a brief scene. 2D animation would be also used in Day & Night a couple years later, but the studio would not utilize the medium again until the Sparkshorts series began nearly a decade later.

It is notable for being the longest individual Pixar short to date, clocking in at eleven minutes.

Your Friend the Rat provides examples of: