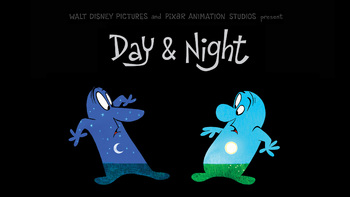 Day and Night is a 2010 animated short film (six minutes) from Pixar, one of the Pixar Shorts. It was written and directed by Teddy Newton.

The short centers around two vaguely Casper-ish creatures, the personifications of Day and Night. The two characters are set against a featureless black background, but they themselves are windows into two scenes, a day scene with a sun in the sky inside Day, and a night scene with a moon in the sky inside Night. The scenes shown inside them usually correspond to their actions; for example, when Day is waking up in the morning, we see a morning scene with the sun rising on a farm, and when Night is sleeping, we see sheep jumping a fence in the stereotypical "counting sheep" scene.

Day is startled to run into Night, who is sleeping. It soon becomes clear that the views we see inside of them are of the exact same place, but a daytime shot inside Day and a nighttime shot inside Night. The two take an instant dislike to each other, and soon they get into a fight. They eventually find out, however, that they do better working together.

Played in theaters in front of Pixar feature Toy Story 3.