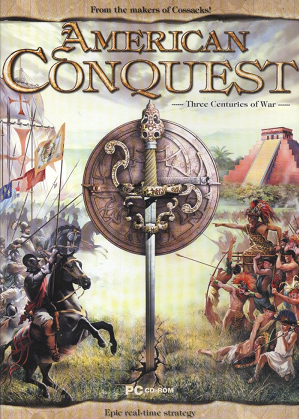 American Conquest is a real-time strategy video game developed by GSC Game World. It is set between the 15th and the early 19th centuries in both Americas, essentially covering their historical conquest by European powers and their wars for independence. There is also an expansion pack called American Conquest: Fight Back. The latest, stand-alone installment in the series is American Conquest: Divided Nation, focusing on The American Civil War.

Essentially being Cossacks IN THE AMERICAS!, it offers ability to field thousands of troops to fight each other, while upgrading the graphics and gameplay engine, adding things like Morale Mechanic, ability to garrison each and every building, extensive rework on recruitment and more.