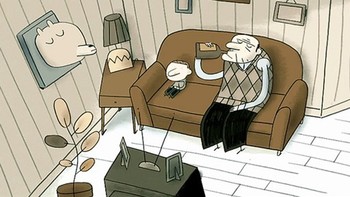 Dimanche ("Sunday") is 2011 animated short film by Patrick Doyon. It was produced by the National Film Board of Canada.

The simple story follows a little Quebec boy on a Sunday in late fall. The boy would be happy to spend his Sunday indulging in his favorite pastime, placing coins on the railroad tracks so they can be flattened by trains, but his parents drag him to church and then to lunch with his grandparents. The very very bored boy imagines that the stuffed bear head mounted on his grandparents' wall is the head of a live bear—and that fantasy takes him to some strange places.