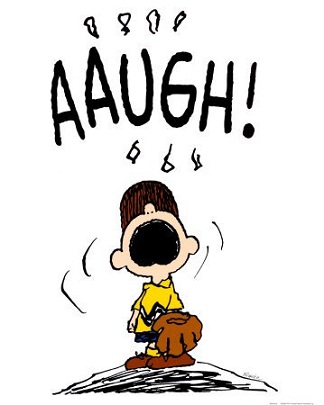 indeed.
"Drawing Calvin is easy! You just make a big mouth and add some hair!"
— Hobbes, Calvin and Hobbes

Mouths. Some can be big, some can be small. And then there are these.

This trope is for when a character shouts so loud, their mouth takes up the entirety of their face, presumably to imitate the effect of a Skyward Scream. A variant exists in which the mouth is viewed from the side.

This is usually used in print and animation.

Sometimes, mouth size and volume are related (i.e. a character speaking softly is indicated by a small mouth).

A character with No Indoor Voice often talks like this. Often coupled with Suddenly SHOUTING!, Big "NO!", Big "YES!" or Say My Name. Compare Demon Head, in which the entire head expands.