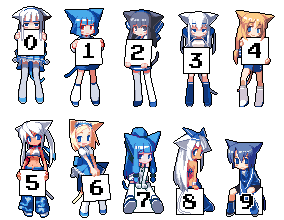 The Danbooru catgirls, seen on the site's homepage to indicate how many posts are currently hosted on the site. Different Boorus might include different characters in their place, though still maintain the same purpose.
Advertisement:

An Image Booru (pronounced "BOE-roo") is a new breed of ImageBoard and is essentially a tag-based image archive. The name is derived from Danbooru (which means "cardboard"), which was the first site of this type. Most of the current boorus are based loosely around anime. Because the idea is still relatively new, there are not that many of them around compared to standard forums or more traditional imageboards. These sites cater to those who want the Pixiv experience, but don't feel like sifting through Japanese; fittingly, a very large majority of the images you see on boorus came from Pixiv first.

These sites often have a tagging system in which users sort the images into categories while uploading: e.g. [X character], [X show], [X artist]. They also have pools where certain images that are related to each other in a way that the tag system doesn't allow for can be collected for viewing, and is the primary means for works hosted on the boorus to be compiled. Most boorus have standardized tagging...but each might have slight differences in how they're standardized, which is something to be aware of when going from one booru to another.

Image Boorus often differ from Image Boards— but are still closely related— by nature of simply viewing many images and occasionally commenting on them as opposed to starting a comment thread with an image and continuing in the same thread with more images. The main advantage over Image Boards is that the images remain in place indefinitely unless deleted by moderators, whereas on an Image Board this is rarely the case. Because Image Boorus also have much the same attitude regarding censorship that other Image Boards have, the content of many boorus is Not Safe for Work. You Have Been Warned.

No relation to Nabooru, though there are probably a few images of her on some of these.