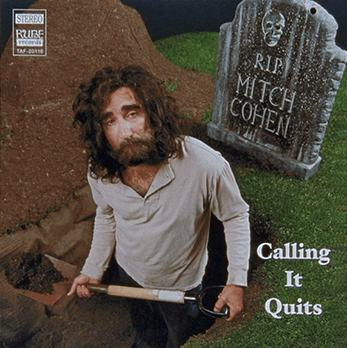 Wonder what his mood was when he made this album?
"It's a Proven Scientific Fact™ that terrible, soul-crushing heartbreak produces the best music (and art of all kinds)."
— Allen Holt, 52 Weeks to Rock

Sometimes, you just have a bad day.

The people who tell stories are just like anyone else. The difference, though, is that if something in their life goes all wahoonie-shaped, they have someone to take it out on — the fictional characters that inhabit their created worlds. Thus, you occasionally end up with a story taking a sharp left turn into the author's psyche. Characters can die left and right, the teenaged hero's schoolteacher will be a sadistic tormentor, and no one's love life has any chance of turning out well.

That being said, though, this doesn't necessarily make the show bad; some shows have achieved their highest ratings and even Grown the Beard in the middle of a bout of Creator Breakdown, and it would be hard to argue that angst can't help you make some really good art. People who have something to work out through their creativity also tend to put a lot of effort into making it good, especially if it's concerning something important or special to them. See also Reality Subtext. However, do look out for the Writer on Board; it can also lead to an overload of Wangst, Deus Angst Machina, Issue Drift, or Too Bleak, Stopped Caring if the creator is really determined to make their creation suffer in their name. The most volatile demonstrations of the Second Law of Metafictional Thermodynamics arise from a Creator Breakdown.

A Creator Breakdown may also be the underlying cause of a Schedule Slip or an Orphaned Series. If the author has enough rights over the distribution of the work, more serious instances of this may result in a temporary or even permanent case of Keep Circulating the Tapes. This is very common among independently produced Web Original works.

Contrast with Died During Production where the creator of a work just dies, leaving a work in an incomplete state. Of course, they can overlap if the creator was Driven to Suicide. If this happens to an in-universe Creator, see Mad God.

Please note, however, that it's hard to tell when Creator Breakdown is happening, this means that if it's a case of Genre Shift for some artistic reason; you shouldn't put an example here unless you have word from either the mouth of the creator themselves or from someone who knew them well. That said...

When an author simply rebels against a work that he's dissatisfied with, it's Creator Backlash. While this is trivia it may be accompanied by the Author Avatar trope if the author uses a character to write the situation into the story or reflect on it.

Oh, and yes, a particularly bad Creator Breakdown usually means that the series will get torn apart piece by piece, often along with the author's reputation. See Prima Donna Director when a director who always behaves in an eccentric way.

The Opposite Trope to this one is Creator Recovery, in which a creator's newfound happiness positively influences their subsequent work. (Sometimes, an artist can even Recover and Breakdown at the same time, in separate aspects of their life.) See also Author Phobia when a creator's fears influence the work. An in-universe version of this usually involves the character being Too Upset to Create.