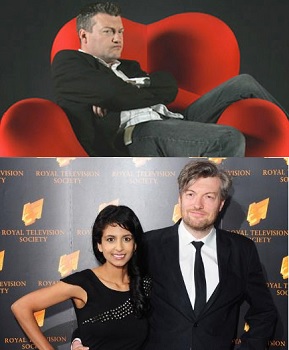 Charlie Brooker: before and after.

We're all familiar with what happens when a writer's personal problems start to intrude upon their work — characters are killed off left and right, plots are resolved either in a depressing fashion or not at all and the worldview espoused by the work as a whole seems much bleaker than it was before.

But what happens when the opposite happens? Whether by dint of marriage, the birth of a child, the author finding religion or some other cause, the author now finds themselves in a much happier place than they were before. And, hardly unexpectedly, this starts to bleed into their work, which becomes Lighter and Softer and much more optimistic.

Just as Creator Breakdown isn't necessarily a bad thing from an artistic standpoint (many artists produce their best work while feeling down in the dumps), this trope isn't necessarily a good thing either: feeling happy and self-satisfied can often lead to an artist becoming complacent and unwilling to push themselves creatively. On the other hand, a sunnier disposition may result in an author cutting down on the Wangst and producing something more accessible.

This is the Opposite Trope to Creator Breakdown and, just as with that trope, Word of God examples are required for it to qualify.