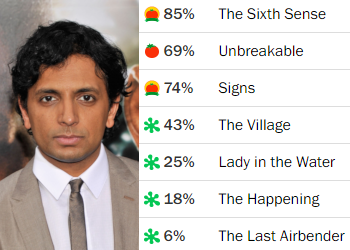 It would be a while before he could recover

from that last one.
Mario: Mike Myers was once a very funny man.
Fafa: And if you watch The Love Guru, you'll actually see his career flushin' down the toilet.
Mario: I... I... I can't watch this.
— Glove and Boots, "Nine Movies That Make Men Cry"
Advertisement:

A Creator Killer is a rather unpredictable phenomenon when one or more works flop badly enough to take down or badly damage the publishers, the reputation of creative talents behind it, or both. Though there are usually many factors needed to cause the death of a publisher or a creator, some high-profile flops are linked (rightfully or not) to the death of the organization working on it. They will Never Live It Down.

Compare Genre-Killer and Franchise Killer. Not to be confused with Died During Production (where the creator dies before their work is completed), Rage Against the Author (where the creator can literally be killed by his/her work) or The Fourth Wall Will Not Protect You (same). See Star-Derailing Role when it happens to the performers. See Old Shame for an old work which a creator turns against later (or refuses to let see the light of day), but which by itself probably won't destroy their credibility. See Tough Act to Follow when one's career was not killed by a flop but the inability to follow-up a massive success. A Role-Ending Misdemeanor is when this trope is caused by personal scandal rather than a failed work. Contrast Breakthrough Hit (when the work makes the creator a big name), Career Resurrection (when the work makes the creator a big name again after a Creator Killer) and Win Back the Crowd (same). For understandable reasons, many of these overlap with Troubled Production. If it literally, and directly, kills them, then it's probably an example of Fatal Method Acting.

Note: While a good number of these entries have either been Vindicated by History or are a Cult Classic, they still count as Creator Killers because of the damage they did at the time of their release.

Not to be confused with Fallen Creator, where a once-respected creator is permanently disgraced due to a string of flops or personal misbehaviors. A creator/business that went defunct after one or two serious flops/mistakes could still leave a lasting legacy and be fondly remembered in hindsight.

(As TV Tropes does not know time, please wait either 10 years after the work's release or, in the case of studios and production companies, for official confirmation before adding an example.)