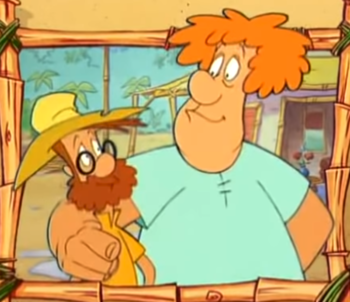 Robinson Sucroe is a French-Canadian cartoon which aired for 26 episodes in 1994. Montreal's famous Cinar studio was among its production companies, and the show's place in that studio's history remains one of the most shocking and disgraceful moments in Canadian film and television, animated or otherwise.

Robinson Sucroe, who works for a newspaper called The New York Herald, is sent by head editor Mr. Floyd to Crab Island to see if it is safe to inhabit. A group of shipwrecked people called the Everydays live there, as well as two different gangs of pirates (one British and one French), all of whom want their existence kept a secret from the outside world. Robinson works together with his new friend Wednesday to write untrue stories for the newspaper claiming the island is dangerous; famous reporter Grumbleston knows the truth, however, and tries (and fails) multiple times to warn Mr. Floyd.

Christopher Izard is credited as Robinson Sucroe's creator in the opening credits, but he is not actually the person who created it; this show is known for being plagiarized from a proposed series called The Adventures of Robinson Curiosity, which was really created by Montreal animator Claude Robinson. Claude sued Cinar over this in 1995 and won the case in 2009, which is good for him... but not so much for this show. Nor Cinar for that matter, for investigation into the plagiarism case by the Canadian government revealed them to be involved in a massive accounting and tax fraud scandal that ultimately brought the studio down (until it was reborn in 2004 as Cookie Jar Entertainment).