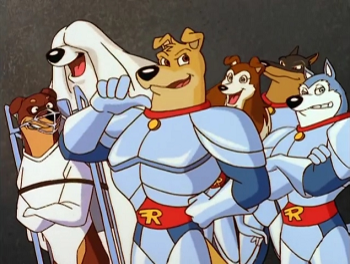 Road Rovers (1996-1997) was a short-lived Kids' WB! animated series (1 season, 13 episodes), which told the story of "The Road Rovers". They were (stop us if you think that you've heard this one before) a group of ordinary animals who become anthropomorphic superheroes and use their special abilities and gadgets to fight crime.

Specifically, the Rovers were a group of stray dogs who are temporarily turned humanlike by a mysterious scientist known as "The Master". They save the world from villains including General Parvo, who was trying to take over the world by turning dogs and other animals into monsters, while in their free time acting as the beloved pets of world leaders (such as Queen Elizabeth II and President Bill Clinton). The fact that the dogs were all pets of world dignitaries at least added an interesting twist, as they sometimes had to work in their 'civilian' identities to convince their owners not to go to war.

After more than ten years, Road Rovers was finally given a DVD release, as of February 11, 2015, much to the delight of longtime fans of the show during its' original run; like Hanna-Barbera's rough equivalent series, SWAT Kats (though that series predated Road Rovers by 4 years), it was released through Warner Home Video's "manufacture-on-demand" program, Warner Archive.