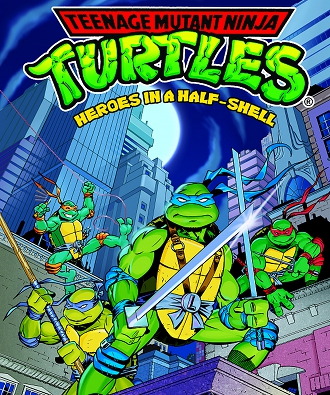 These turtle boys can cut a paycheck.
Advertisement:

A common western action cartoon format that was very popular in the 1980s and 1990s (after the success of Teenage Mutant Ninja Turtles spawned a crop of imitators) and still continues to this day.

The format is more or less this: A team of heroic monsters (aliens, mutants, or magical beings) are somehow created, awakened, or arrived in the modern world. Usually a modern American city. They are honorable creatures who set out to fight crime. The average person fears them for their appearance, and they must hide from Muggles or humans. However, they befriend one or two open-minded humans, usually either children or career women. These women or children end up being the team's friends and guides to modern Earth, and are Secret Keepers, and may also be the Kid with the Leash. Together, they all fight supervillains and evil creatures in a City of Adventure.

Since these shows are usually aimed at young boys, expect The Smurfette Principle to be in full swing. The heroes are usually The Last of Their Kind, with no femalesnote except maybe The Chick. Consequently, Interspecies Romance will usually be explored, particularly by fans, especially if the Secret-Keeper is a career woman.

The Secret-Keeper will often be hiding them in the beginning, but since the monstrous team is usually a Five-Man Band or Power Trio, they usually get their own headquarters. It's a good thing that Abandoned Warehouse/office building/ornate palace was around!

These series tend to be Merchandise-Driven.

Not to be confused with Ninja Pirate Zombie Robot, though the Rule of Cool often plays a role.