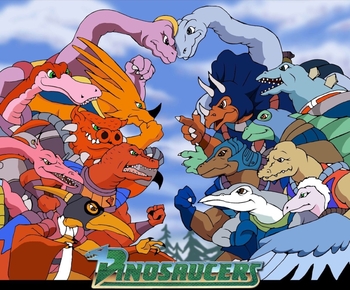 Dinosaucers was a short lived but fondly remembered Animal Superheroes cartoon from the United States. It aired for one season as a 65-Episode Cartoon that aired in First-Run Syndication on weekdays. It is about a war carried out on Earth between two groups of anthropomorphic dinosaurs from the planet Reptilon. The good Dinosaurs are the titular Dinosaucers who fight a group of evil dinosaurs, the Tyrannos. The Dinosaucers have also recruited a bunch of Earth kids called the Secret Scouts to help them in their fight.

The Dinosaucers also have a power called Dinovolving, which transforms them into normal, non-anthro dinosaurs while retaining all their other human-like abilities (talking, ect.) However it's rarely used and usually didn't appear for entire episodes. The Tyrannos themselves do not have this ability, but they do have a Transformation Ray gun that does essentially the same thing — but the now-normal animal character has that animal's intelligence as well. The device is usually used on the Tyrannos themselves for comedic effect, because in spite of all the action/adventure elements, more often than not the stories are Played for Laughs. Despite the unusual premise, it was boosted by general tongue-in-cheek writing and pretty good characters. Compare/contrast the genuinely ridiculous Extreme Dinosaurs, Dino Squad, Kung Fu Dino Posse, Jurassic Strike Force 5 and DinoZaurs.

Although this show was made by DIC Entertainment, and features original characters, it is not part of the DIC library (which is now owned by DHX Media), due to being owned and distributed by Coca-Cola Telecommunications, which is now part of Sony Pictures Television, making them the show's current rights holders.note Coca-Cola owned Columbia Pictures at the time the series was made.

In 2017, Lion Forge produced a comic book continuation of the show, with Darker and Edgier material that was aged up in tone from the original.

There is a Characters page that needs some love.