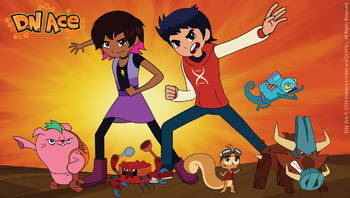 D.N. Ace is a Canadian animated series created by Matthew Wexler and produced by Nelvana, with the Japanese animation studio OLM Incorporated (most famous for animating the Pokémon anime) serving as a production consultant.

12-year-old Ace Ripley is an average boy from the town of Del Juevo, living in a world where robots are a way of life for many and having them clash in stadiums is common entertainment (something he dreams of becoming a champion in someday). However, Ace's life changes when he and his best friend Sloane Plunderman discover his family's big secret — a cave hidden in his basement containing a meteor emitting unusual radiation from it.

There, Ace encounters Mendel, a 500-year-old squirrel who was rendered immortal and given the ability to talk from exposure to the meteor. Mendel was a friend of Ace's grandfather (who studied the meteor and its power alongside him) and has been instructed to do as he has with all of Ace's family since the day the Ripley home was built over the meteor — introduce himself to Ace and reveal their family secret when he comes of age. While Ace has actually shown up 4 years ahead of schedule, Mendel nevertheless presents the boy with something that he and Grandpa Ripley created — a pocket watch-shaped device called the Descrambler (or D-Scram for short), which has the power to combine the D.N.A. of a living thing with the molecules of an inanimate object to create creatures that Ace decides to call "Scrammers".

Now, with his grandfather's Descrambler in hand, Ace is out to protect his grandpa's secret from any who dare to exploit it for evil (namely Sloane's Annoying Younger Sibling and world's youngest billionaire Huxley), and he's going to have the time of his life while he's at it.