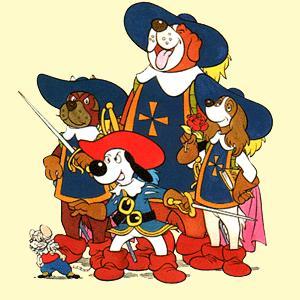 Dogtanian and the Three Muskehounds is a 1981 cartoon based on the novel The Three Musketeers by Alexandre Dumas. The cartoon was created by Spanish animation studio BRB Internacional and co-produced in Japan by Nippon Animation, one of many successful collaborations between the two. The show aired first in Japan in 1981 on the TBS network, then debuted on Television Espanola in Spain a year later, and has since aired in various other countries, including the United Kingdom, France, Canada (in French), Mexico, Spanish-speaking South America, Portugal, and Brazil.

This was a remarkably faithful 26-part adaptation (with some inevitable bowdlerisation; for instance, Dogtanian's love interest Juliette, is M. Bonacieux's niece rather than his wife), with one major difference: the principal characters are all anthropomorphic dogs, as is most of the supporting cast, with the occasional cat, pig, bear or rabbit.

Young Dogtanian is a child of poor but honest parents, living in a small village in Gascony, scrapping with his puppy pals and dreaming of becoming a Musketeer (the title notwithstanding, they're called "Musketeers" throughout - at least in the English dub). When a messenger arrives from his father's old friend Monsieur de Treville, head of the Musketeers, asking that Dogtanian be sent to Paris to train under him, our hero sets off armed with a sword, a decrepit old horse and an ointment that can heal any wound.

On his journey he falls foul of a mysterious cavalier, the Man with the Black Moustache, and ends up walking to Paris with no money and a broken sword. He arrives at last and falls in with the trio of friends known as the Three Musketeers: The Leader Porthos, portly Athos and romantic Aramis (the book roles of Athos and Porthos are swapped).

Dogtanian's spirit and swordsmanship soon make him an indispensible part of the team, and he settles down to a life of duelling with the Cardinal's Guards, wooing the lovely Juliette and foiling villainous plots against nice-but-weak King Louis and his wife Anne of Austria. His ultimate aim is to prove himself and be accepted into the ranks of the Musketeers.

Anyone who grew up in the UK and Spain in the 1980s will almost certainly remember this show, as it seemed to be on permanent loop along with The Mysterious Cities of Gold and Around the World with Willy Fog. By contrast, its ratings in Japan were poor, and it's not as well known in the United States either, although the English dub was made in California (and features none other than Cam Clarke as the voice of Dogtanian). A sequel series was made in 1990 that continued with a new story based on The Vicomte de Bragelonne, although changing "the man in the iron mask" for "the man in the golden muzzle".

BRB uploaded the full series for their youtube channels.

A full-length all-CGI animated film was announced in July 2018, and released in 2021. See the teaser trailer

Not to be confused with Kunihiko Yuyama's non-canine take on the story, The Three Musketeers (1987).