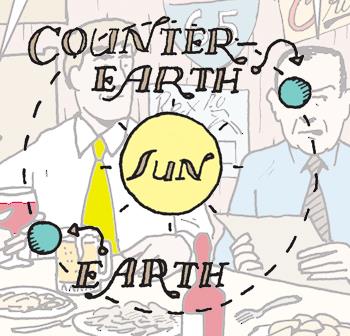 A hypothetical planet on the other side of the Sun from the Earth which is usually like the Earth, but hidden. The idea was popular in old science fiction, and continues to appear in sci-fi that is not very hard.

The concept originated with the ancient Greeks and was known as Antichthon, which is Greek for Counter-Earth. Its use in modern stories is an example of All Theories Are True.

In Real Life, this idea has been proven false, even before the Space Age. A Counter-Earth's gravity would affect the motion of other planets, and other planets' gravity would cause it to drift out of its position. The final blow was when probes actually went the other side of the Sun from us and didn't see any counter-earths. It's still an exciting idea for fiction, though.

Not related to blocking the ground.