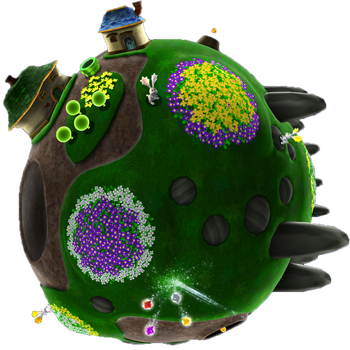 "It's not the size of your planet, it's how you use it!"
— Emperor Todd Spengo, Mom and Dad Save the World
Advertisement:

An inhabitable planet that is far smaller than astronomically possible, often less than a few functional miles in diameter. In Real Life, a body this small would be called an asteroid or be a natural satellite orbiting a planet; a body needs to be hundreds of kilometers across to be rounded under its own gravity

, and even larger to support an atmosphere. But in fiction, these often sport an entire ecosystem awkwardly compressed into the minute available space.

Although Sci-Fi Writers Have No Sense of Scale, they usually aren't this far off the mark on accident; this trope usually comes about either because of limitations in technology's ability to represent planets in a realistic scale or just for the sake of aesthetic. Perhaps, in enough stories featuring these planetoids, they hold gravity at such smaller sizes because A Wizard Did It.

Often, this is used for purely aesthetic reasons, particularly on cover art for games and CDs. Just as often it's Art Major Physics. In photography, this effect is often created with very-wide angle (or fisheye) lenses.

Bonus points if it's unusually shaped too.

Related to Floating Continent and Space Compression. Not to be confused with LittleBigPlanet, It's a Small World, After All or Planetville.