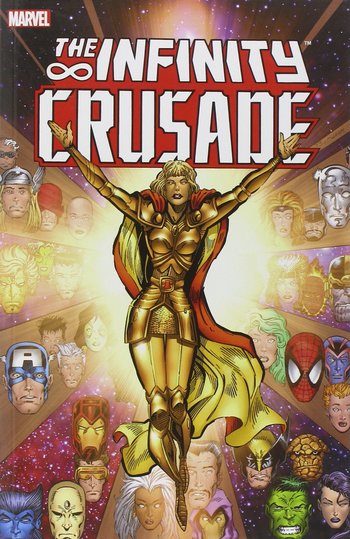 Take care, Light Is Not Good
The Infinity Crusade was a Crisis Crossover by Marvel Comics, written by Jim Starlin. It is a sequel to The Infinity Gauntlet and The Infinity War.
Advertisement:

The antagonist of this miniseries is the Goddess, the good part of Warlock who was created at the same time as the Magus. She tries to use the power of Cosmic Cubes and Cultlike More Than Mind Control to subvert Earth's more idealistic heroes into serving her so she can establish a Utopia by any means necessary. Defeating her required the help of Mephisto.