Radio / The Adventures of Superman 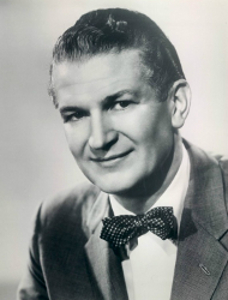 Disguised as Bud Collyer, mild-mannered game show host.
Look! Up in the sky!
It's a bird!
It's a plane!
It's Superman!
— Opening Narration
Advertisement:

The Adventures of Superman was composed of five different radio series which ran consecutively from 1940-1951, all produced by Robert J. Maxwell. Most of the episodes starred Clayton 'Bud' Collyer as Superman, Joan Alexander as Lois Lane, Julian Noa as Perry White and Jackie Kelk as Jimmy Olsen. Aired for the majority of its run on the Mutual Broadcasting System.

The originator for many longstanding pieces of Superman lore, from the name of the newspaper Clark works for to the members of his cast and even extending as far as his iconic flight and weaknesses. Notable for the first meeting of Superman and Batman. In fact, when Collyer wanted a vacation during the series' run, Batman and Robin would occasionally be featured in some episodes.

Bud Collyer and Joan Alexander reprised their respective roles of Superman and Lois for the Superman Theatrical Cartoons and The New Adventures of Superman.

The series' most famous story, "Clan of the Fiery Cross," is loosely adapted for the Superman comic, Superman Smashes the Klan.