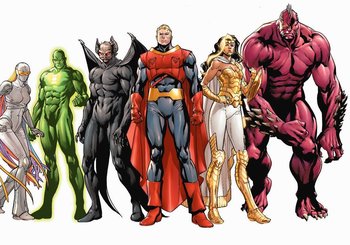 In 2001, Stan Lee was asked to re-write the DC Universe from the bottom up. Wait… Batman's the son of a cop? Superman's an Anti-Hero? Robin's a thief? How did all this happen?

Exactly What It Says on the Tin, Just Imagine… was a series started in 2001, when Stan Lee collaborated with DC Comics to reimagine DC's biggest heroes from his own storytelling perspective. Origins are radically changed (as are the causes for their powers) while still keeping to the basic feel of the various characters.

The characters rebooted include:

As of Grant Morrison's The Multiversity, this universe has been officially designated as Earth-6 in the DC Multiverse. The characters would go on to have cameos and guest appearances in other work that involved the multiverse.