Radio / The Adventures of Harry Nile 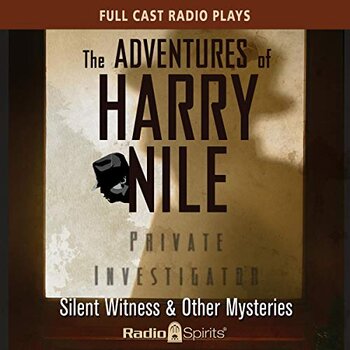 A radio drama series that operates as a more modern take on the 40s/50s Private Detective, first created in 1976 by Jim French and primarily aired in Seattle.

The series features the eponymous Harry Nile (played by Phil Harper and Larry Albert), a former internal affairs police officer turned private investigator who operates in Los Angeles and, later, Seattle, in a time frame that goes from shortly after WWII to the 1950s. While beginning the show with a partner, he's since gone solo—that is, alongside his loyal and strong-willed secretary, Murphy (played by Pat French). He frequently finds himself in debt—though his gambling days are behind him, he doesn't attract much work and his good-natured heart often leaves him doing jobs for free or on pocket change.

In 1996 the series was syndicated nationally, and has since become international. Each episode is about 20 minutes long, with breaks for radio advertisements. Despite a twelve year hiatus from 1978 to 1990, and the death of Jim French in 2017, new episodes continue to be made under the auspices of voice actors Larry Albert and John Patrick Lowrie, who took over management of Imagination Theater and its assets with Jim French's blessing before his passing. Series episodes can be purchased for download at the Harry Nile website