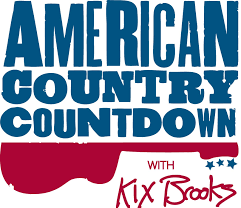 American Country Countdown is a weekly, long-running syndicated radio program, currently hosted by Kix Brooks (of the country music duo Brooks & Dunn), which counts down the 40 most popular Country Music songs in the United States.

The show's history dates to October 6, 1973, and was conceived as a spinoff of American Top 40. Both programs were created by Don Bustany, Tom Rounds and Los Angeles radio personality (and voice actor) Casey Kasem. Initially, Don Bowman – a Lubbock, Texas, native who became famous for his comedy recordings and association with Waylon Jennings and Willie Nelson – was the host. While he did a very credible job, conflicts with his touring schedule eventually forced him to give up the show in the spring of 1978. Bob Kingsley, who began producing the program in the spring of 1974, took over as host, and the rest was history.

The Kingsley era was arguably the height of the program, with his shows very much similar to Kasem's programs, in both hosting style and features: the occassional oldie or album cut, and stories about each of the songs. ACC – as the show is sometimes known – was initially three hours (just like AT40 in its early years), and expanded to four effective with the January 18, 1986, show.

Like AT40, ACC eventually began to play requests and dedications from listeners, today called "ACC Inbox". Much like Kasem's "Long Distance Dedication," the requests were often sentimental in nature and directed at someone whom the listener had not seen in some time, or an anniversary of a landmark event (such as an anniversary or a relative's death).

Kingsley hosted ACC until 2005, when he was forced out after ABC Radio Networks – which owns the program – wanted to revamp the show; the announcement was made in October, and Kingsley's last program was December 24, the last regular countdown program of 2005. Kingsley started a rival program, Bob Kingsley's Country Top 40, while ACC tapped Brooks as its new host. After several weeks of substitute hosts, Brooks took over on January 21, 2006.

Like AT40, song-ranking data originally came from Billboard magazine, only this time using the Hot Country Singles (now Country Airplay) chart. The show used Mediabase as its chart source from August 2009 to the summer of 2017, when the show reverted to the Billboard Country Airplay chart. The show's chart length was trimmed to 30 songs effective February 12, 2011, then later reverted to 40. Kix has also ditched the retro songs in favor of more recent recurrents.

In April 2015, a newly syndicated series consisting of repeat broadcasts of Kingsley-hosted ACC programs from 1990-2005 was announced. The new show is called ACC Rewind With Bob Kingsley.