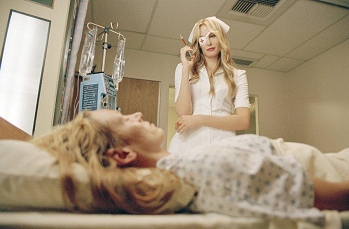 This won't hurt a bit...
Advertisement:

Someone is too close to finding out the truth. Or perhaps he or she knows too much for their own good. For whatever reason (possibly an earlier not-quite-successful murder attempt), this person has been seriously injured or gotten ill and is now lying defenseless in a hospital bed. An assailant slips behind the hospital staff and quietly sneaks into the hospital room with intent of killing the patient. Sometimes they succeed. Sometimes they don't.

Scarily enough, there are cases where this is Truth in Television. There's even a criminological term for medical personnel who use their access to incapacitated people to become serial killers: angels of death

Can overlap with Vorpal Pillow (suffocation with a pillow depicted as a much faster and quieter means of death than it actually is). May overlap with Make It Look Like an Accident, especially if performed by a doctor or a member of the nursing staff. May also overlap with Slain in Their Sleep, if the slaying is done while the victim is still unconscious.

Compare with Coup de Grâce, Dude, She's Like in a Coma, Room Disservice, Sitting Duck, and Slain in Their Sleep.

Alternative Title(s): If You Should Die Before You Wake