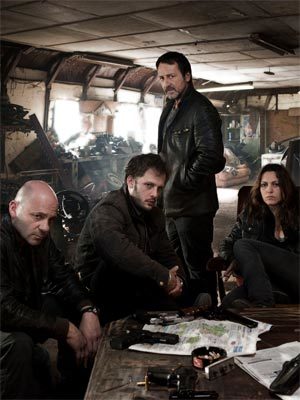 Braquo (French slang for armed robbery), 2009-2016, is a gritty French crime drama created by Olivier Marchal. It follows four cops from the SDPJ 92, a police department operating in the Hauts-de-Seine département, west of Paris: Commandant Eddy Caplan and Lieutenants Roxane Delgado, Walter Morlighem and Théo Wachevski. While they have a reputation for being the best of the best, the IGS (Inspection Générale des Services, the Internal Affairs of French police) has been on their case for quite some time for good reason, and they have to divide their time between chasing ruthless criminals and covering up evidence of their own crimes (which includes several murders and robberies).

Season 1 opens as Max Rossi, Eddy's best friend, becomes the target of an IGS investigation for brutally mutilating a man suspected of raping and killing a pregnant woman, and commits suicide. Eddy and his team decide to do whatever it takes to clear Max's name, but they fall into a trap set up by Roland Vogel, the IGS captain who drove Max to suicide, Prosecutor Christian Vanderbeke, who has an old grudge against Eddy and Max, and Serge Lemoine, a career criminal arrested several times by Eddy and looking for an immunity deal.

Season 2 has the team at their lowest point: following their arrest, Théo has been dismissed from the police, Walter and Roxane are demoted to the lowest rungs, and Eddy is in jail, having taken full responsibility for the events of Season 1 in order to protect his comrades. While in jail, Eddy is offered a deal to infiltrate the Invisibles, a gang of former elite soldiers who committed several murders and robberies in their quest to get revenge on the French officials who left them to rot in Angolan jails. Eddy manages to bring the team back together for this mission, which he accomplishes successfully, recovering his freedom and their former ranks.

Season 3 finds the team tangled in a war of succession between vory v zakone operating in France: Levani Jordania, designated heir of the late boss Iossif Vissarionovitch, and Mikhail Pavlovich, a literal son of a bitch who runs drug and prostitution rings despite Vissarionovich's prohibition. As if that were not enough, they have to deal with Vogel, who has gone rogue and is hunting them down one by one.

Season 4, the series finale, moves the action to Marseilles, as Walter enacts his vendetta on Baba Aroudj, a Turkish vor v zakone boss who tortured Walter's children in retaliation for the killing of his own son. While in the South, Eddy and Walter are caught in Captain Guido Francoeur's attempt to dig up the unsavory past of Georges Mandeville and Serge Grenner, two Marseillais notables negotiating lucrative shipping deals with the Turkish mafia.

Subtitled versions of all episodes are available on Hulu