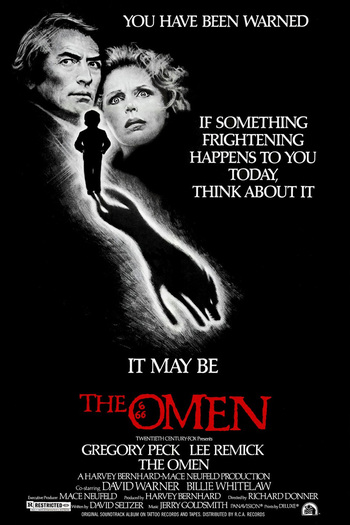 Behind the face of an angel lies a heart of darkness...
“Here is wisdom. Let him that hath understanding count the number of the beast: for it is the number of a man; and his number is six hundred threescore and six.”
— Revelation 13:18
Advertisement:

When Robert Thorn's (Peck) wife Katherine (Remick) delivers a stillborn child, a priest approaches Thorn with the offer of another newborn whose own mother died at the same moment. To spare his wife the grief, Thorn agrees to the switch and lets her believe the child is their own. Several years later, Robert becomes the American ambassador to England and the Thorn family moves into a large manor there. And that's when mysterious deaths and odd events begin to plague the Thorns and those in their orbit, especially those who attempt to convince them that little Damien (Stephens) is not all he seems...

It kicked off the ''Omen'' franchise and spawned several sequels: Damien: Omen II (1978), The Final Conflict (1981) and Omen IV: The Awakening (1991). The original movie was remade in 2006. The 2016 TV series Damien is a direct sequel to the original film, ignoring the rest of the sequels.

Damien survives the attempt on his life and gets adopted by the President.

Damien survives the attempt on his life and gets adopted by the President.