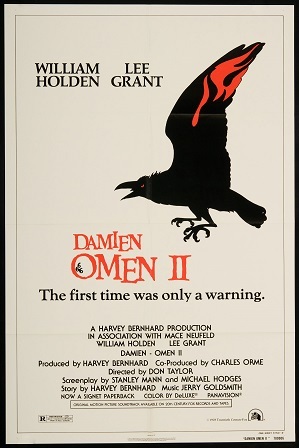 Evil learns of its destiny.
Advertisement:

A sequel to The Omen, directed by Don Taylor and released in 1978.

Damien Thorn, the Antichrist-to-be, has been adopted by the family of his father's brother. While he starts coming to grips with his supposed destiny, horrible deaths befall on those who might stop him or discover his true nature.

Jonathan Scott-Taylor plays Damien, while William Holden and Lee Grant star as his aunt and uncle. Also in the cast are Lew Ayres, Sylvia Sidney, Lance Henriksen, and Robert Foxworth.