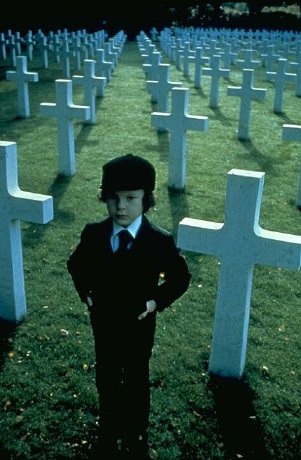 "When the Jews return to Zion and a comet rips the sky,
And the Holy Roman Empire rises, then You and I must die
From the eternal sea he rises, creating armies on either shore
Turning man against his brother 'til man exists no more."
Advertisement:

The Omen is a horror film series that started with a 1976 film. It is one of the many films that are viewed as partial inspirations for the Satanic Panic.

The movie followed a cycle of 'demonic child' movies, such as Rosemary's Baby and The Exorcist.

After the first three films were novelized, two non-canon book sequels were written by Gordon McGill (Omen IV: Armageddon 2000 and Omen V: The Abomination) chronicling the exploits of Damien's son and his attempts to cause the end of the world through interfering with the international peace process. There were a number of copycat films such as the Italian-made Kirk Douglas movie Holocaust 2000. The death scenes and causes of them also allegedly inspired the Final Destination film franchise.

In 2016, a TV series based on the films called Damien premiered on A&E.

Not to be confused with American heavy metal band Omen.

This movie series contains examples of:

open/close all folders
The Films
The Novels