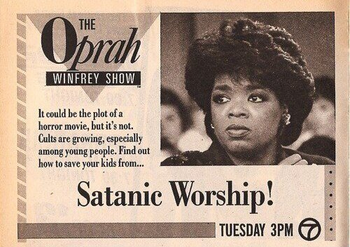 The Oprah Winfrey Show, 1986.
The Satanic Panic is a moral panic and phenomenon that took root in The '80s and The '90s, mostly in America, though examples have been found worldwide. The phenomenon features Moral Guardians who become obsessed with Devil worship and, specifically, Hollywood Satanism. Usually, it extends to panic on behalf of the Culture Police including Heavy Metal music, Dungeons & Dragons and other fantasy games, and any other youth-centric interests, fueled by hypnosis and a new interest in psychiatric care. Many of the creators of such works would try to downplay the occult connections to avoid such accusations, while others leaned into it for the shock value.
Advertisement:

It was also believed to be inspired in part by the turn towards They Look Just Like Everyone Else! paranoia in media of The '60s and The '70s. The popular success of Rosemary's Baby, The Omen, and The Exorcist and its following adaptation, and the many, many Satan-themed paperback horror novels that followed in their wake, are believed to have inspired it. Rosemary's Baby is the Trope Codifier as it depicts a Satanic cult in a New York City of the Big Applesauce variety; Ira Levin even went on record to say that he felt partially responsible for the ensuing Satanic Panic as he felt he had played some role in mainstreaming it. Real-life cult activity throughout the late '60s and '70s — most notoriously, those led by Charles Manson and Jim Jones — and occult-adjacent serial killers — like the Zodiac Killer, or David Berkowitz, aka "The Son of Sam", the latter of whom genuinely did claim to have been part of a Satanic cult — gave the whole thing a patina of "but it really happened" plausibility.

As a result, it is a subtrope of Witch Hunt. Other common features include Horror Hippies, Rock Me, Asmodeus!, Drugs Are Bad, and Loners Are Freaks, due to the general fear of the "other" and youth culture that fueled it. It will usually involve Everyone Is Satan in Hell being invoked in-universe.

It finally died out in mass culture after being largely discredited by the Turn of the Millennium, though it still features heavily throughout media, especially for a Genre Throwback or Ripped from the Headlines storylines. Certain elements of the Panic — namely, literally unbelievably widespread child abusenote  — that children are abused is, sadly, undeniably true; but if children were being abused and murdered on the scale alleged, it would be impossible to conceal; allegations made against celebrities and other prominent public figures; and the notion that a vast shadowy "them" is simultaneously concealing all evidence of these crimes, and also publicly confessing to them via coded messages — have surfaced again recently in the QAnon conspiracy theory. It is likely that both are influenced by the far older anti-semitic Blood Libel

conspiracy theory, and Satanic Panic accusations often resembled historical Witch Hunt claims as well. Indeed, some promoters of QAnon have explicitly described it as being a Satanic conspiracy

, setting it up to be a case of history repeating — though others have a wide variety of alternative explanations. And, as with the Panic, people can be drawn in by the reasonable-sounding premise that if something bad is happening to children, we should surely investigate it, a premise that experiences some problems in light of, for example, the McMartin Preschool case

There are two mostly distinct forms of the trope in media: one treats it as though it is all real and a justifiable fear, and another that takes a more historical look at it as a phenomenon of media hysteria. The former is especially likely to have Unfortunate Implications in the modern day.