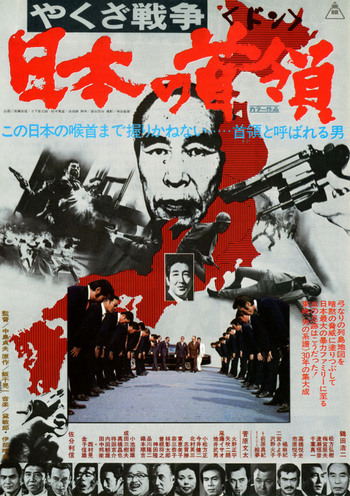 "In this world, I may die, but my dreams won't."
— Boss Issei Sakura in Nihon no don: Yabohen
Advertisement:

Nihon No Don (日本の首領, approximately translating as The Japanese Godfather or The Japanese Don) is a Japanese trilogy of organized crime films released from 1977 to 1978. Very loosely based on the real-life exploits of Japan's biggest yakuza gangs, the series was adapted from a novel by journalist Kazuo Kasahara and was produced by Toei, who earlier rewrote the rules of the yakuza genre with Kinji Fukasaku's Battles Without Honor and Humanity.note Also worthy of note is that Kasahara also wrote the source novel for both series while the films share a screenwriter in the form of Koji Takada.

By 1977, attendances for Toei's yakuza films had gone down significantly, thanks in no small part to the advent of the television. In response, the studio decided to bring in veteran director Sadao Nakajima and assembled an All-Star Cast billed as "30 Years of Toei Men" with genre veterans Koji Tsutura, Bunta Sugawara, Hiroki Matsukata, Sonny Chiba, Mikio Narita, Nobuo Kaneko, and Tatsuo Umemiya alongside veteran actors Shin Saburi and Asao Uchida. Toshiro Mifune would later round out the cast for the two sequels, while Chiezo Kataoka replaced Uchida in the third movie.

The first film, Yakuza Senso: Nihon No Don (Yakuza War: The Japanese Godfather) chronicle the exploits of yakuza godfather Issei Sakura (played by Shin Saburi and based off real-life yakuza boss Kazuo Taoka), boss of Japan's most powerful crime syndicate, the Osaka-based Nakajima family note Itself based off Taoka's Kobe-based Yamaguchi-gumi, which around the time the films were released was and still is the world's largest organized crime syndicate. and his attempts to be crowned "The Japanese Godfather", ruler of the yakuza underworld. By now the wily Sakura has conquered most of the rackets in Central and Western Japan, leaving only Tokyo and the Kanto area untouched. After being called in to help a major corporation deal with a blackmail problem, Sakura plans to move in to Tokyo. He assigns his Blood Knight Number Two Shuei Tatsumi (Koji Tsuruta) to lead the way with Tsukichi Sakoda (Sonny Chiba), Seiji Kataoka (Mikio Narita), and Shiro Matsueda (Hiroki Matsukata). However, the Tokyo gangs, spearheaded by Eizo Iwami (Bunta Sugawara) stand in his way, aided in secret by powerful political power broker Kikuo Oyama (Asao Uchida). A massive Mob War erupts for control of the Tokyo rackets as loyalties are tested and both sides manipulate the political and business worlds to one-up each other.

The second film, Nihon No Don: Yabohen (The Japanese Godfather's Ambition) takes place two years after the first, where the Tokyo gangs, now headed by Sakura's rival Kozuke Oishi (Toshiro Mifune), are now united under an umbrella organization known as the Kanto Alliance. Sakura, having recovered after a long illness, plans to take over Tokyo by manipulating the Japanese stock market. However, the corrupt dictator of the oil-producing Republic Of Gardenesia, President Annata (Youssef Omar),note Inspired by Indonesian dictator Sukarno, who infamously consorted with the yakuza in Real Life. arrives in Japan with a lucrative oil deal that could mean billions of dollars in profit. Both Sakura and Oishi scramble to earn Annata's favor.

The third and final film, Nihon No Don: Kanketsuhen (The Japanese Godfather's Finale) sees Kikuo Oyama (now played by Chiezo Kataoka) fall victim to a rare stomach cancer. Naturally, with his position as Japan's most powerful political fixer up for grabs, both Sakura and Oishi try to succeed him. Oishi in particular is also pursuing his dream project: turning Saipan into the the Las Vegas of the Pacific. To this end he manipulates political party leader and Sleazy Politician Shigenori Karita (Satoshi Nishimura), whose son is romantically involved with Sakura's daughter to act as a go-between in a bribery deal involving corrupt US Senator J.H. Gerald (Tony Diamond). However, things go south when armed men arrive, steal the money, and try to make a getaway before being chased and killed by the police, who also recover the money. With a massive scandal on his hands, things get worse for Oishi when the bribery receipt disappears and ends up in Oyama's hands. The burning question remains as to who set up the robbery as both Sakura and Oyama plan to finish off Oishi before they can settle who gets to rule the Japanese underworld.