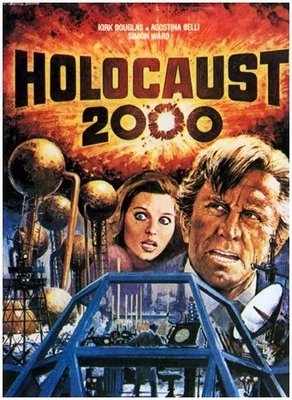 The world will be destroyed in a rain of fire. It is written.
Advertisement:

Holocaust 2000 (also known as Rain of Fire and The Chosen) is a 1977 Italian Religious Horror movie directed by Alberto De Martino and starring Kirk Douglas. The soundtrack was composed by Ennio Morricone.

Robert Caine (Kirk Douglas) is a true believer in nuclear energy. As a wealthy and powerful industrialist and engineer, he plans to build power plants to make nuclear power commonplace all over the world. Naturally, he is unconvinced by protests in the Middle East over his controversial decision to build one such plant near a sacred cave.

However, just as he is about to reap the benefits of his hard work and retire on a comfortable nest egg, turning over his corporations to his son Angel (Simon Ward), he starts having disturbing dreams, visions of the Apocalypse as described in the Book of Revelations. And his son is starting to show signs that he might be the cause of it...