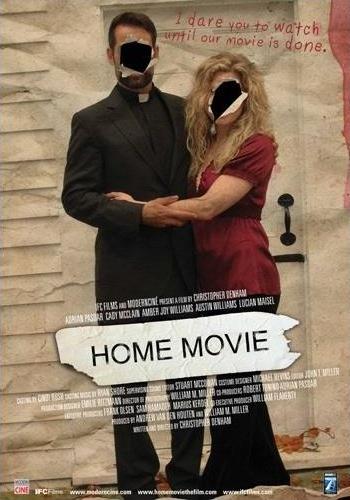 Always a good sign.
"There seems to be a tendency nowadays to, and it's been gradual, I think, there's a checklist that we have for children; where whenever there is a problem, there's a solution, and we have Oprah, and we have pills and we can sort of prescribe away the problem. I think it's still possible for a family to do everything right, and still have things go terribly wrong."
— Director and Writer Christopher Denham

Home Movie documents one family's descent into darkness through compilation of the Poe family's home-made video footage. In the remote woods of upstate New York, David and Clare Poe are attempting to live an idyllic life. However, the Poe children are hiding a dark secret and something is wrong with ten-year old twins, Jack and Emily Poe. To stop them, their parents must enter the nightmare of their children’s minds. As they try to regain control of the children’s lives, the pressing question becomes who will ultimately survive the battle.

Definitely not to be confused with Home Movies.