Removed from the Picture 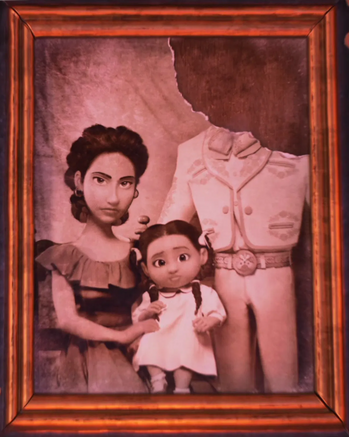 When Photoshop hasn't been invented yet,
you have to make do.
Bob's relationship with Alice has fallen through, and he never wants to see her face again. Rather than just throw away all the pictures with her in it, he burns, cuts, tears, or marks over her face in every single photograph of Alice he has, or maybe just one really important one, like a wedding photo.
Advertisement:

Alternatively, Alice is Bob's Stalker with a Crush, and has several photos of Bob and his girlfriend Carol, with Carol's face burned, cut, marked over, torn out, or otherwise mutilated, sometimes with her own face glued in. The photos may even be pasted all over a Room Full of Crazy. In these cases, it may not be that Alice actively hates Carol, just that she thinks that she deserves Bob more. (Or maybe she does actively hate Carol after all.)

Unperson is this being done for political reasons. Compare Burn Baby Burn, Paper Destruction of Anger,and Stab the Picture when the entire photo is burned, pulped, shredded, etc., not just Alice's face. Someone being removed from a Family Portrait of Characterization can be a sign of dislike or disinheritance.

Compare Convenient Photograph (which is technically an inverse, because that trope is about what's in the photograph). However, they can overlap if the removal itself is convenient and/or the missing piece reveals a plot-relevant aspect.

Alternative Title(s): Burned Out Of The Photo