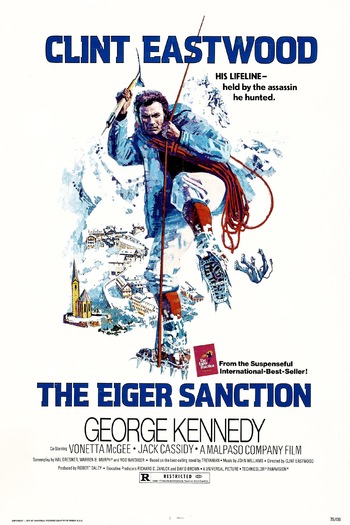 "One of our agents has been killed in Zurich by two men. We want you to sanction them."
Advertisement:

A 1975 American action thriller film directed by and starring Clint Eastwood, based on the 1972 novel by Trevanian, with a screenplay adaptation by Warren Murphy, co-creator of The Destroyer series.

Art professor Jonathan Hemlock (Eastwood) is a retired government assassin who gets coerced into doing One Last Job for his former employer C2: the sanctioning of the two enemy agents responsible for the murder of Agent Wormwood (actually Henri Baq, an old Vietnam War buddy of Hemlock's). While one agent is known and quickly dispatched by Hemlock, the only thing known about the second agent is that he'll be part of an expedition to climb the notorious north face of the Eiger in the Swiss Alps.

While Hemlock enlists his former climbing partner, Ben Bowman (George Kennedy), to help get him in shape for the climb, he soon finds himself in the sights of Miles Mellough (Jack Cassidy), another old war buddy turned Double Agent. And, should he survive this, Hemlock still has to confront an unknown killer on the deadly mountain itself.