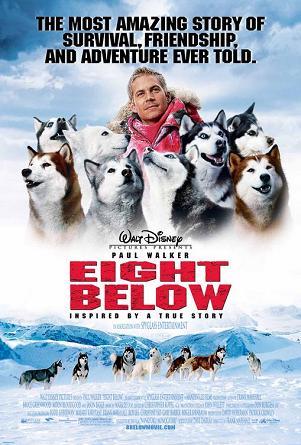 Eight Below is a 2006 American adventure drama film directed by Frank Marshall and distributed by Disney.
Advertisement:

The movie is mostly set in the Antarctic, after an expedition with Dr. Davis McClaren (Bruce Greenwood), the sled dog trainer Jerry Shepherd (Paul Walker) has to leave the polar base with his colleagues due to the proximity of a heavy snow storm. He ties his dogs to be rescued after, but the mission is called off and the dogs are left alone at their own fortune. For six months, Jerry tries to find a sponsor for a rescue mission while his dogs fight for survival.

Both this film and the 1983 Japanese film Nankyoku Monogatari (better known as Antarctica) were loosely based on the same real-life events.