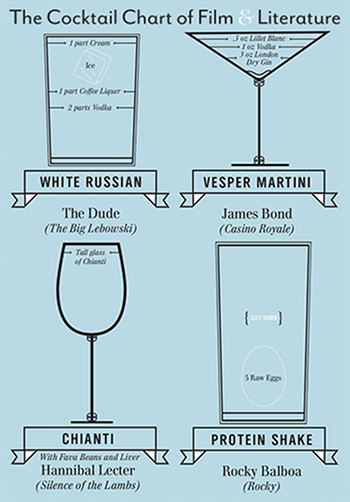 In certain moments, attention is drawn to what a character is drinking because it emphasizes their personality in some way. "Harder/grittier" drinks, such as black coffee or strong alcohol, contrast against "softer/weaker" drinks, such as mocha cappuccino latte or milk. Sometimes these characterizations are temporary, such as when a teetotaler decides I Need a Freaking Drink. Other cases may be examples of Trademark Favourite Food, where it implies an urge of consistency in their personality, but rarely anything else. The examples below should indicate both a drink and a trait.

Sometimes characters order "against type", subverting audience expectations (although this is still playing the trope straight), such as a hardboiled character ordering milk or something sweet and girly.

Some common personality shorthands are as follows:

The drink order can be code for nationality and social class. See National Drinks for more details.

Has some overlap with Age-Stereotypical Food. See also Luxurious Liquor, when what is communicated by a character's choice of drink (one rarely ordered but always found on hand) is their liquid assets. Also goes well with Must Have Caffeine.

Contrast Your Favorite and Trademark Favorite Drink, where the drink doesn't represent anything about the character's personality, it's just a character is expressing a fondness. These tropes can overlap, and drink orders themselves are likely to be delivered in the form of The Triple.

Other examples (which do not fit in the previous types):