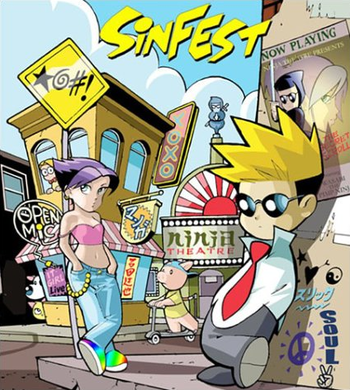 is a Webcomic by Tatsuya Ishida, an outgrowth of a strip he originally created for the UCLA college newspaper. It's one of the longest-running webcomics around, with over 6,700 strips as of spring 2019.

Sinfest began in 2000, and started out as a light-hearted comedy revolving mainly around the goofy antics of Slick, a Calvin-esque teenaged "pimp" who was always trying to look cool and pick up chicks, and his hot friend Monique, who spent her days flirting with hot guys (of whom Slick never qualified). Other prominent characters included God, the Devil, Jesus, Buddha, and the Dragon, an embodiment of Eastern religion; Seymour and Li'l Evil, raging fanboys of God and the Devil respectively; Squigley, a stoner pig who is one of Slick's pals; The Artist, a comic artist and Ishida's Author Avatar; Percival and Pooch, the Artist's cat-and-dog duo; and Criminy, a sheltered bookworm and mutual friend of Slick and Squigley.

In its early years, Sinfest was mainly a gag-a-day comic with little regard for continuity. In addition to the humor based on the cast's foibles, it routinely played with Black Comedy scenarios, drug- and sexually-themed humor, and subversive pokes at the nature of religion and morality, among other topics and Running Gags. Slick and Monique's odd friendship/rivalry/something was the foundation of the comic and focus never strayed from it for long, but after a few years, other storylines became prominent, such as Criminy's chaste romance with one of the Devil's succubi, the Devil becoming a more serious antagonist, and revelations about Li'l Evil's backstory, as well as politically-themed gags and overall development for many characters.

However, in October 2011, Sinfest began a huge shift in theme and focus with the introduction of the Sisterhood. The comic quickly ditched almost every aspect of its old nature and turned toward a radical brand of second-wave feminism. From that point on in the world of Sinfest, society was brainwashed by a Matrix-like Patriarchy controlled by the Devil which the Sisterhood fought against, and the comic's world was connected to an alternate reality where greed, lust, and other traits fueled by the Patriarchy are the norm. The Sisterhood became part of the main cast, while characters with little influence on the comic's new themes such as God, the Dragon, Buddha, and even Criminy were barely seen. The Sisterhood's influence drastically changed both Monique and Slick, and they now rarely interact.

Then in 2019, seemingly overnight, Sinfest saw yet another radical shift in theme. To an outside observer, the current setting now seems like the polar opposite of what was preached in the past decade, with "woke" movements and groups becoming quite literally demonised, and subplots beginning that tacitly support more conservative values and beliefs. The one common thread remaining is a severe indictment of the sex industry, but the less said about any of this, the better. Beyond that, storytelling trends introduced in the New 10's remain in practice. Several new characters have been introduced, and the comic is focusing on extended storylines that can run for weeks at a time, with once-regular gags only occasionally showing up. Sinfest now is so different from its former self as to almost be a new comic, which could make an Archive Binge a jarring experience.